Shortly after the birth of America, the small, secluded community of Andonville, Massachusetts, rested on the border of a forest steeped in legend and rumors. People start disappearing, and Abigail loses everything. She wants nothing more than to abandon Andonville and the terrible forest, putting the past and the problems of the city behind her. Fate has other plans, however, and she gets sucked into the mysteries around her.

Gerald’s life suddenly changed, leaving him moody, hungry and scared. He lives in terror due to his own wife! For reasons Gerald cannot fathom, she has become a witch bent on hexing him. While attempting to survive his wife’s curse and its side effects, he discovers a new friend and a town that feels like it was made just for him. As Gerald’s plight grows worse, he begins to document his experiences, but little does he know, his wife has been keeping a record as well, and not all is as it seems. 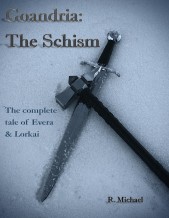 Goandria lies under the cruel rule of worlox demons. Emerging from an unknown realm, they claim large swaths of the northern territories for their own.  The wizards, blessed with power from Voshnore, continue their fight against them with little success. Pushed back to the south,  generation to generation, year by year, they labor in vain. Until now.

Lorkai, general of the wizard army, returns home after years of fighting. He brings long awaited successes on the battlefield. Yet those successes come with prices of their own. Several of Lorkai’s men now anguish in worlox occupied areas. Following a warm welcome, Lorkai’s request for aid is refused. Lorkai and his best friend, Evera, take matters into their own hands. The wizards uncover secrets about the worlox, which leads the friends to fight for their lives, and their humanity.

Generations passed after the fall of the worlox demons and their tyrannical rule.  Peace was restored, and in that peace, Three Republics rose up to maintain order in the heart of the mainland.  But a new darkness threatens to upset the fragile peace of Goandria.

​Aron, an Archris Knight of the Republics, returns home from the battlefield only to find himself plunged back into the war.  The world’s hope lies in a small band’s ability to unite, despite their differing races and beliefs, to protect their homelands against the rising monster, Zontose, who now declares himself god-king.

​Powerless to aid the warriors, a young girl’s visions bring both hope and despair.  The fate of Goandria might depend on what she sees, but who can she trust?